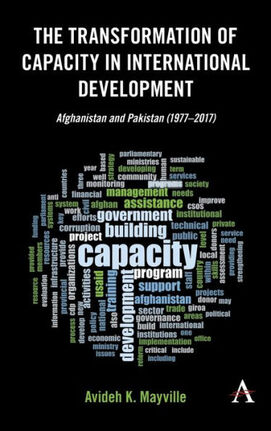 "The Transformation of 'Capacity' in International Development" examines the transformation of capacity as a concept within the global development agenda through an analysis of USAID projects and policy in Afghanistan and Pakistan between 1977 and 2017. It traces the evolution of donor discourses from the Cold War through the Global War on Terror, exposing the tensions within donor agendas between market, human rights and security-based narratives and discourses. As the global development agenda subsumes major areas of international debate defined by competing objectives, these tensions are absorbed, obscured and depoliticized with the transformation of capacity.

The transformation of capacity unveils donor approaches to building capacity as a form of statemaking, involving development projects as a tactic for building networks between centralized, national spaces (accessible and held accountable to the "international community" of states) and subnational environments harboring transnational militant threats to global security. Through an examination of the USAID example, this book exposes how the donor attempt to develop the capacity of "fragile" states and to manage transnational militancy reveals a fundamental struggle over the ownership and future of global governance and development.
​
As the US-led war in Afghanistan approaches 20 years, the failure of capacity development requires a fundamental reexamination of the priorities of the international community and development efforts in conflict zones. In exposing the transformation of capacity, the present volume contributes to our understanding of how human rights and security approaches to development have been obscured by the transformation of a popular concept within development. This transformation--involving shifts in policy and political agendas over time--reveals the fundamental tensions between donors and recipients as they work to build sustainable networks and institutions that ensure security, justice, greater access to opportunity and basic human rights of those caught in the crosshairs of global conflict. When we look at how the human rights agenda becomes warped in practice alongside the shifting tides of the global security objectives of the United States, we see the obscuring political power of major concepts of practice such as capacity. As scholars and practitioners consider the future direction of human rights approaches to development, this book informs alternative approaches to the failure of the status quo.